In the summer of 2015 in Seoul, South Korea, Bea, her sister Emma and her parents, we met shortly on two train rides to the international airport of Incheon in South Korea.

Bea and her family are South Africans and I thought they were from Europe, they spoke a language close to Dutch (Afrikaans) and they were not asian, as you know that almost 98% of the population in South Korea is only South Korean and it all started by excusing myself and asking them the question: ” Excuse me, can I ask you question? ” ” Yeah, sure ” ” Are you guys from Europe? ” ” No, we are from South Africa ” and the rest is history

Bea and her sister Emma, were at that time, English teachers in Seoul and her parents where visiting them in Seoul, South Korea and they were on their way to the airport to fly to Bali, Indonesia.

The first photo is taken in a nice bar in Durbanville, it were my very first minutes in South Africa 🇿🇦 I just arrived in the international airport of Cape Town after 2 long flights (stop over in Doha, Qatar) with Qatar Airways: It was so cool, to see and being welcomed by Bea and her friends Anja and Quintin, they came from Moorreesburg to pick me up at the airport.

At the airport, I also arranged my very first rental car, but what I didn’t knew before … was that they drive on the left side of the road … so the steering wheel and the gear shift was on the right, which meant to shift gear with the left arm … thanks to this travel, the kidness, the warmth, the friendships, the nice moments with Bea, her parents Conrad and Elsa, Emma, Bea’s friends Anja, Anja’s mother Susan, Quintis, Emma’s friends Cilliers and Stiaan, Bea’s friend Charlotte in Stellenbosch and all the other South Africans that I’ve met during my trip and mostly all my own ” life lessons ” and the typical ” Travel-Newbie ” mistakes

At the family dinner with Bea and her parents Conrad & Elsa, Anja and her mother Susan, we talked about the things in life and Bea her both parents as well as the mother of Anja, are teachers at the the schools in Moorreesburg and Susan asked me if I had plans in the next morning. She asked me if I wanted to talk and share my life ideas with the kids in school. If you hear almost on daily base your teachers, their words start to become a bit ” numb ” to them.

So in the morning, Bea and Anja took me to the school of Moorreesburg.

Fun fact about Moorreesburg, it’s a a small town, 100 kilometers away from the capital Cape Town and has a population of 12000-ish people and they have ONE traffic light!

So I thought, oh, a few kids in class (like 10-ish, because Susan told me, that most of the kids in school already went on Christmas Hollidays), but apparantly the remaining kids of the different classes, that were still in the school there, some of them, came into the classroom, to ” hear ” some of my ideas and experiences.

It was an amazing experience, being able to ” inspire ” but mostly make those kids smile, create a nice ‘ lecture ‘ and a fun interaction with them, thanks to Susan, Bea and Anja, I have this amazing memory for the rest of my life! What a great way to start my very first South African morning!

The second photo was taken in Paternoster. We made a coastal trip and we passed places like Langebaan, Paternoster, Blouberg. In Paternoster, Bea and her friends introduced me to eat ‘ Samosas ‘ 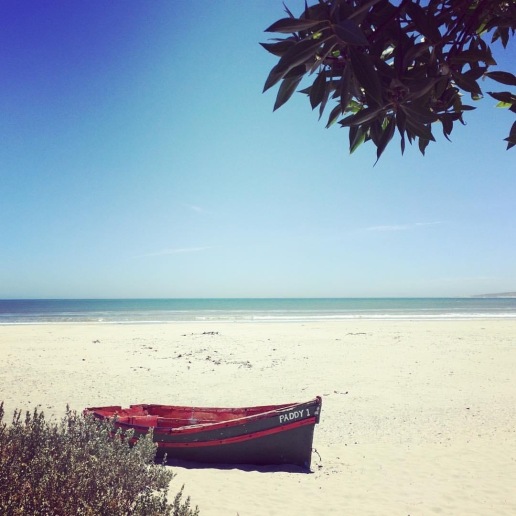 This was the view from the restaurant, where we made a stop to lunch and where I got introduced to the South African samosas with fish 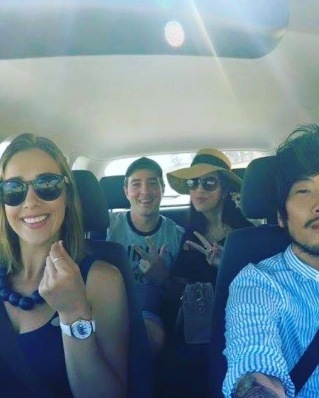 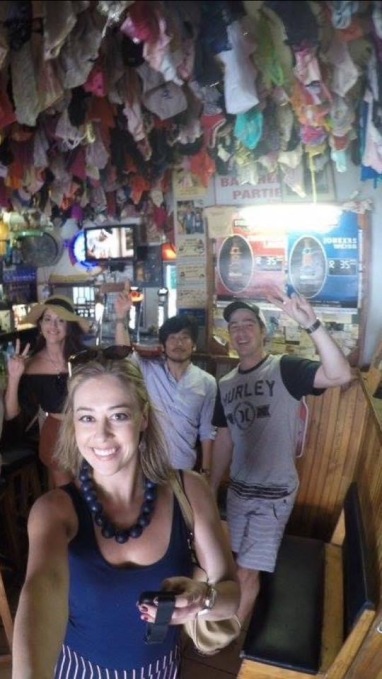 When we arrived in Langebaan, Bea persuaded me to buy flip flops, since I didn’t had one with me …

and the weather in South Africa was really nice (30 degrees-ish).

” Fun Travel Fact “: Those flip flops … I still have them and they join me on all my travels!

With the view from Blouberg at the amazing Table Mountain (one of the 7 Nature Wonders of the World).